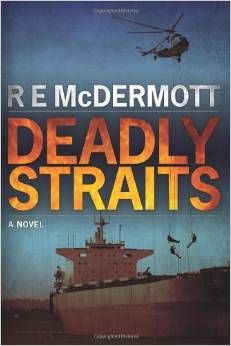 When marine engineer and very part-time spook Tom Dugan becomes collateral damage in the War on Terror, he's not about to take it lying down. Deadly Straits is a non-stop thrill ride, fast-paced, multilayered and gripping.

Order Now!
About the Book

In the tradition of Clancy and Cussler, R.E. McDermott delivers a thriller to rival the masters. When marine engineer and very part-time spook Tom Dugan becomes collateral damage in the War on Terror, he’s not about to take it lying down. Falsely implicated in a hijacking, he’s offered a chance to clear himself by helping the CIA snare their real prey, Dugan’s best friend, London ship owner Alex Kairouz. Reluctantly, Dugan agrees to go undercover in Alex’s company, despite doubts about his friend’s guilt. Once undercover, Dugan’s steadfast refusal to accept Alex’s guilt puts him at odds not only with his CIA superiors, but also with a beautiful British agent with whom he’s romantically involved. When a tanker is found adrift near Singapore with a dead crew, and another explodes in Panama as Alex lies near death after a suspicious suicide attempt, Dugan is framed for the attacks. Out of options, and convinced the attacks are prelude to an even more devastating assault, Dugan eludes capture to follow his last lead to Russia, only to be shanghaied as an ‘advisor’ to a Russian Spetsnaz unit on a suicide mission. Deadly Straits is a non-stop thrill ride, from London streets, to the dry docks of Singapore, to the decks of the tankers that feed the world’s thirst for oil, with stops along the way in Panama, Langley, Virginia, and Teheran. Richly spiced with detail from the author’s 30 years sailing, building, and repairing ships worldwide, it is, in the words of one reviewer, “fast-paced, multilayered and gripping.”

Endorsements
A fast-moving thriller packed with action and intrigue.
– Scott Nicholson, best-selling author of Liquid Fear
With his debut novel, McDermott sets the bar high--very high. This ambitious novel will keep you turning the pages to get to the thrilling conclusion. This is a truly impressive first book. I look forward to reading more from him.
– Neal Hock, Bookhound's Den
International intrigue in the hands of an expert. With his breathless pacing and punchy prose, McDermott knots a complicated plot so real it might as well be breaking news. Deadly Straits ravages like a category-five hurricane: unpredictable, merciless, and fierce.
– L.C. Fiore, award-winning author of Green Gospel
Order Now

About the Author
R. E. McDermott

R. E. McDermott is a merchant seaman by training. After graduation from the Merchant Marine Academy, he sailed for several years, and then spent thirty years as a marine consultant. He has traveled widely, seen interesting things, and lived in several countries. He has come to know more than a few interesting characters in his travels, and bits and pieces of them populate his novels.

Preview
Disclosure of Material Connection: Some of the links in the page above are "affiliate links." This means if you click on the link and purchase the item, I will receive an affiliate commission. I am disclosing this in accordance with the Federal Trade Commission's 16 CFR, Part 255: "Guides Concerning the Use of Endorsements and Testimonials in Advertising."
This website uses cookies to improve your experience. We'll assume you're ok with this, but you can opt-out if you wish. Cookie settingsACCEPT
Privacy & Cookies Policy

This website uses cookies to improve your experience while you navigate through the website. Out of these cookies, the cookies that are categorized as necessary are stored on your browser as they are essential for the working of basic functionalities of the website. We also use third-party cookies that help us analyze and understand how you use this website. These cookies will be stored in your browser only with your consent. You also have the option to opt-out of these cookies. But opting out of some of these cookies may have an effect on your browsing experience.
Necessary Always Enabled
Necessary cookies are absolutely essential for the website to function properly. This category only includes cookies that ensures basic functionalities and security features of the website. These cookies do not store any personal information.
Non-necessary
Any cookies that may not be particularly necessary for the website to function and is used specifically to collect user personal data via analytics, ads, other embedded contents are termed as non-necessary cookies. It is mandatory to procure user consent prior to running these cookies on your website.
SAVE & ACCEPT